This article is about the vtuber. For other uses, see PHIA (disambiguation).

"Hey guys, and welcome back to...the Virtual Reality Show! Where we talk about any and all things related to virtual reality! Inside...virtual reality!"
―PHIA

PHIA, also known as PHIAbunny or Sophie, is the creator and host of The Virtual Reality Show.

The proper way to write her name is with all capital letters - PHIA, rather than Phia. The name PHIA comes from Sophia. On a day to day basis, PHIA goes by her nickname Sophie. 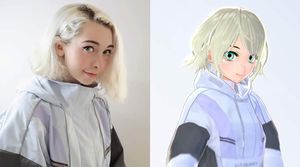 PHIA's different avatars are based on her real world physical appearance and clothing.

Sophia "PHIA" Bollinger was born and raised in the state of Missouri, but now currently resides in Florida. Her love of VR started after getting her first headset, an Oculus Rift S, on Christmas Day of 2019. Using the headset for the first time changed her perception of reality forever, sparking an obsession with all things virtual.

On February 15th, 2020, PHIA came up with the idea of TVRS during her drive to her college classes. The rest of the day was spent scripting, recording, editing, and creating "The Virtual Reality Show" YouTube channel. The first episode was uploaded to the channel a little past midnight, marking February 16th as the upload date of the first TVRS episode.

Although PHIA has posted several songs on her Soundcloud page, she no longer makes music due to having lost the master files of her songs.