"“OI BRUV, SUCK ON MI TOES”"
―The phrase spoken by PHIA that inspired by the phoot meme 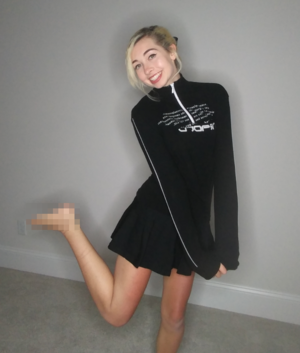 Phoot (plural pheet) is a spelling of the word "foot" with a PH. The phoot meme is central to the culture of The Virtual Reality Show. It appears as numerous emoji and is commonly brought up or joked about in casual conversation.

Images of PHIA's feet blurred out are posted in the phoot dealership channel on the PHIA Discord server. Users can also redeem 1,000 channel points on the PHIAbunny Twitch channel to have PHIA shout Pheet during a livestream.

The origin of the “Phoot” meme started as an inside joke between PHIA and Protostar. The very first time they ever talked on a voice call was in early January 2020. During this time, they had decided to play Risk of Rain 2 and very quickly started talking about the differences between their linguistics. Protostar is British while PHIA is American.

PHIA, while poking fun at Proto’s British accent, exclaimed “OI BRUV, SUCK ON MI TOES”. This took Proto off guard because he had never heard anyone use any “toe sucking” as an example of a stereotypical British language before. The reasoning for PHIA saying this was because one of her friends had a sign in her dorm that had this phrase written on it, which stuck with PHIA for months after as hilarious.

Proto was unable to stop thinking about how strange and funny it was that PHIA had exclaimed this phrase, so he began spurting toe puns regularly during their conversations (such as “toetally” or “Protoestar”). The puns became a regular part of PHIA's and Proto's interactions, and it slowly turned into jokes about feet. It became a regular occurrence that jokes about feet where made.

A few weeks later, the PHIAboo Army Discord was formed, before the creation of The Virtual Reality Show. The small and comfy community was mostly conversations between PHIA and Proto who would begin to engage in their foot jokes. The other Discord members, found their discussion of feet odd. They would often begin to joke about the discord having a fetish for PHIA’s feet because of how much they were talked about. During this time, the community began replacing all words with an “F” in them to having a “PH” instead, to mirror the “PH” sound in PHIA’s name. It didn’t take long before the two jokes were intertwined, and the concept of the Phoot was born.

After TVRS was created, PHIA and Proto would often have video call chats. One time PHIA had picked up her foot on camera at an angle where the lighting made it holy and beautiful whilst goofing around. Proto explained how the discord would probably be jealous that he had such a good view of PHIA’s phoot right now, so PHIA told him to take a screenshot of it. This was the first phoot pic to ever be taken.

Because the pair knew that some people do have genuine fetishes for feet, they decided it would be funny to censor PHIA’s phoot as if it was nudity or inappropriate. The first phoot pic was then dropped into the general chat, and the Discord went into an hysteric uproar. The situation was then eternally escalated past the point of no return where PHIA’s pheet were eternalized as a meme in the community.

After multiple phoot pics being taken, PHIA had become a Twitch Affiliate and was looking to create emotes for her Twitch channel. The number one most requested emote by her community was to create a “phoot” emote, and so PHIA paid someone to draw her a phoot.

Soon after, enough phoot pics had been created that Protostar became known as the only person in the community to know what PHIA’s pheet really looked like. He obtained the role of “Phoot Dealer” (later known as Dealer of Pheet) in her Discord. A “Phoot Dealership” channel was created soon after, where all of the censored phoot pics were stored. It became a introduction ceremony for new Discord members to be warned, “Whatever you do, don’t check out the #phoot-dealership.”

While some community members actively found the phoot joke strange or weird, others took the joke to be completely serious and have sent DM’s to PHIA asking for her prices.

Eventually during one of her Minecraft streams, PHIA promised that when she hit 100k subs on her YouTube channel, she would do a “Phoot Reveal” and uncensor one of the phoot pics to celebrate the milestone. The decision to not reveal her pheet was carried over to the video “Finally got a Valve Index, why does it smell like FISH???” where she censored her pheet the entire video. This decision was made during editing since the original unboxing footage was never expected to be released.

"Whatever you do, don’t check out the #phoot-dealership."
―A common greeting to newcomers to the PHIA Discord server

Phoot dealership is a channel in the PHIA Discord server where Protostar has posted pictures of PHIA with her feet blurred out. This is a parody of the foot fetish. Some of these pictures also appear in the Protophia Kingdom Minecraft resource pack. Users can be notified of additions to the phoot dealership channel by reacting to the phoot emote.

As of February 24, 2021, the phoot dealership has been temporarily removed from the Discord channel.

"I'm sorry but for me, this is stupid AF... nothing against your content, but blurring your feet on purpose? like, WTF... So let's say there are people that have some kind of fetish for feet... and there are other people that might have for hair, eyes, hears, legs, arms, hands, smiles... wtv makes them horny ... my question is, are you going to start using a burka or shall we just blurry your entire body?? .... I don't follow you and I was quite interested in the Steam VR unboxing but then the only thing i could focus on was in your blurry feet ... couldn't even see the youtube video from start to bottom because my focus was not in your words but in your feet...This is the first time i see something like this and I'm disappointed because you and the gentleman with you have made this entire episode about your feet and not about the unboxing ... when you go to the beach do you use sandals with socks or just normal trainers? .... and btw makes no sense to blurry yr feet when we can go in your Instagram and see them .... so from now on if you are going for blurry feet at least remove the photos in your Instagram as well, at least makes it equal in both socials."
―YouTube comment on Finally got a Valve Index, why does it smell like FISH???

Although the phoot meme has been received well among the community, some who are new to the meme take it more seriously than intended. A YouTube comment on the "Finally got a Valve Index, why does it smell like FISH???" video became infamous for its wording. It has often been copied and pasted across the PHIA Discord server and other social media as a means of encapsulating a common reaction to the uninitiated to the meme.