AlickReef is a Mod for PHIA.

AlickReef or better known as Alick is one of the many mods for PHIA. He joined PHIA's community on 25th of January 2021 which so happened to be PHIA's birthday stream. He felt a connect and decided to stay and join more stream later on. Then on 30th of March 2021 PHIA contacted Alick if he would like the opportunity to become a mod for her and said yes. Alick has since then assisted modding many streams, monitoring and dealing with community issues on discord, help moderate events and meetups. As well for some unknown reason Alick has had numerus dreams of not only PHIA but also the other Mod in wacky situation were PHIA be came a Mafia boss or being the leader of a war to defeat an great evil to music video style dream. for why these dreams occur it is unknown, but they continue and there is no stopping them.

AlickReef was not a simple Human as at birth his soul entangled with a demon and a noble warrior. This happened as a demon was killed his soul travelled the realm and landed on Earth and decided to take over a human baby and make its new vessel to bring new darkness to the world, all at the same time a noble warrior was killed by a dark lord and travelled across the realms to also land on Earth, it also decided to attach it self to a new vessel to bring new hope and light to the world. However what they didn't realise was that they entered to same baby at the same time entangling both their souls and the baby's soul together. The baby's name was originally called [Redacted] he struggled with his emotions and comprehending what was happening around him, always feeling like he had voice speaking in his head which always distracted him. As time went on he continued this life and started to shake and lose control of his body, as if it would no longer listen to him. As he turned into an adult his body still would no longer listen to him but worked and tried to live a normal life, until he met a demon.

He was shocked and scared but a voice spoke and guide him to kill it, then another spoke to steal its power, confused he ran away. He then arrived at his grandfathers place and talked to him about his troubles, like he always did, telling him how he felt different and was strange but his grandfather told him to embrace who he was and not let anyone speak down to him. As he told his grandfather the demon his grandfather quickly got up and dragged [Redacted] to a room were a with a large wooden box with a lock, he then unlocked it to reveal a sword and a half Oni mask. He could feel the holy energy on the sword and dark demonic energy on the mask. He looked at his grandfather in confusion and his grandfather told him that he knew it was real and that he could feel the something on him, two strange energies but didn't know what until he found these and waited till he thought he was ready. [Redacted] then clearly heard two voice one telling to grab the sword and the other grab the mask. As he waited and was confused what was going on, the demon from earlier broke into the house and was tearing it all apart to find something, someone. His grandfather looked at him and told to stay here before reaching into the box to grab his gun and ran out to face to the demon. He then waited confused scared he listened as he heard gunshots and smashing sound until he listened to him grown and listened to blood splatter to the floor. Time stopped at anger and rage came to him and now only wished to defeat the demon. Two voice then spoke to him telling him that he can gain power to defeat the demon, one told him to take the sword and accept to light and it will install him holy powers to slay all evil, while the other voice to wear the mask and grant him dark powers to lay waste to all that stood in his way. 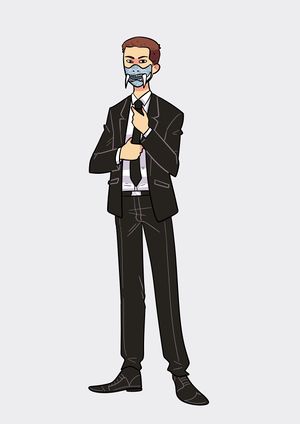 AlickReef in his demon hunting attire.

[Redacted] asked why he couldn't have both powers, to which they responded saying that having both light and dark inside him would kill him and soul would evaporate into nothing. He laughed and said "Screw it" and attached the mask to his face and unsheathed the sword and drew on both light and dark. Strangely he did not die but rather now held the power of both the mask and sword, which left the voice inside confused and shocked. However [Redacted] didn't waste a second and charge at the demon and defeated it. Soon afterwards he was in his room in a suit just returned from his grandfather's funeral and was gifted a business card by the DHO (Demon Hunters Organisation) inviting him to join and slay demons for a living, but on the condition he abandon his old life and embrace his new one. So [Redacted] left with nothing but his suit, the mask, the sword, and his grandfathers ring neckless and gun. Only leaving a letter for his family saying goodbye.

When arriving at the DHO they assigned him a new name, his new name became AlickReef.