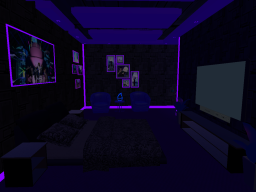 PHIA's Apartment is a public VRChat world that was commissioned by PHIA. It is currently in development by Mr Kite.

The link to the world can be found here. The world is currently in Community Labs. It is recommended to visit this world regularly or set it to your home world. This way, the world can be set to public automatically after a certain amount of time.

PHIA's Apartment is a cyberpunk themed world. Players begin in a hallway with two doors - one leading to the apartment proper, and the other leading outside. The apartment can be accessed by pressing the handprint panel allowing the door to open and step inside.

The apartment itself is within a single room. The color palette is mostly dark with neon colors - blues and purples. A control panel allows the switching between a couch and a bed. Additional controls will change the lighting color and the presence of particles. Pictures adorn the walls. A flat screen television that can play videos and music from another URL is present. The apartment features a balcony which contains a vista of the rest of the city. A switch will toggle the balcony overlook to a mirror.

The alley is accessed by entering the regular door. It takes place in a city that draws inspiration from real locations such as Tokyo as well as fictional areas such as the cities in the Blade Runner series. Chinese, Japanese and Korean text comprise many different signs and billboards. One noteworthy addition is a billboard with The Virtual Reality Show logo.

Most buildings in the area are made from brick and concrete. Additional details were created from photo scans of real environments. Some areas contain mysterious 2D shadow figures, presumably used to evoke the feeling of a populated city.

Prominently in the background is a towering skyscraper with red neon lights. Similar skyscrapers can also be found beyond the barriers of the world.

The skybox is always at night and contains a bluish nebula to evoke the feeling of space.