This article is about Discord server. For other uses, see PHIA (disambiguation). 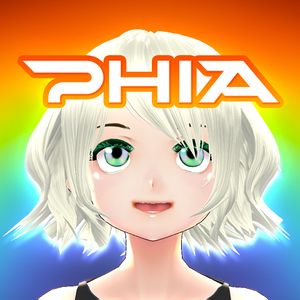 The icon used for the Discord channel

The PHIA Discord server (also known as the PHIAboo Army) is the official server for The Virtual Reality Show. Users can communicate directly in real time with other members of the TVRS community, including PHIA. Options include text chat, voice chat and streaming. Additionally, the server features a number of custom emotes. A person with Discord Nitro can use these custom emotes on other servers.

The rules of the Discord are as follows:

✧･ﾟ: ✧･ﾟ: The PHIA way is to be excited and inspired! This is a place to bond over our excitement for the future of VR. This community is welcome to anyone with interest, and I hope you will also discover the thing that feels right to you!  :･ﾟ✧:･ﾟ✧

React to the bots[sic] message below to enter the server!

A new user must then react to a thumbs up message. Upon doing so, they will gain the member role which grants them access to other channels.

Additionally, all chat should be English. This is to make sure that other users in chat can understand one another. 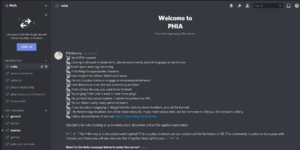 The rules channel of the Discord

The Discord server is split into several sections. Sometimes, temporary channels are created for specific events.

This category is reserved for putting out important notices. Only moderators can send messages on these channels.

This category is for general discussion.

This category is for creatively-inclined users to discuss their projects and ambitions.

This category is for discussing the specifics of virtual reality and vtubing.

This category is only visible to Patreon supporters.

This category is for administration, and it is only visible to moderators.

This category is about the TVRS Wiki.

This category is for other voice channels.