A PHIA model is one of several different 3D character models that PHIA uses in her videos. PHIA bases the appearance of her models on her real-world appearance sometimes featuring apparel from Chloma.

PHIA uses VRoid Studio to create the initial model followed by touch ups with Blender. The avatar is then uploaded to VRChat, one of the locations where she films episodes. VirtualCast is another tool used for filming.

In VRChat, she uses tracking equipment - controllers for her VR headset in conjunction with full body tracking to capture her movements.

For Twitch streams, she uses additional software such as Luppet. This allows her avatar to move in real time as a separate app while streaming.

The original PHIA model was created on October 23, 2019. The original 1.0 model was available for free download on her VRoid hub page, but no updated models or alternate models have been available since. The outfit was based on a real outfit PHIA had put together that was inspired by a "Cyber Schoolgirl" theme.

The 2.0 PHIA model update featured an improvement to hair texture and an updated eye texture for all PHIA models and some minor clothing improvements for clipping issues.

The 3.0 PHIA models are in .fbx format rather than the usual .vrm. They have fixed body tracking for VRChat as well as hair physics with colliders. 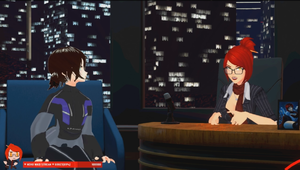